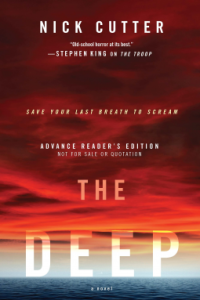 I am hard-pressed to grade this book, because I loved it… until I didn’t. And that “didn’t” came in the last 1/3 of the book, including the ending.

The premise of The Deep is very promising. There is an incurable disease called the GETS that slowly kills people. First you start forgetting little things like where you put your keys or the name of your boyfriend in high school, then you forget more essential things like how to feed yourself, until you forget how to breath or your heart forgets to beat. It’s always lethal and nobody knows what causes it. But there might be hope for humanity. A substance has been discovered deep in the Mariana Trench that might be able to cure the GETS. A group of scientists had been lowered down to study it in a high tech habitat called the Trieste. Only the base station above has lost contact with Trieste several days ago, and then a horribly broken body of one of the scientists surfaced in the bathyscaphe that had been attached to the habitat. Two people are sent down to investigate what happened. They will face more than just crazy scientists and the crushing pressure of the depths.

As I said, I started really liking what I was reading. Loved the main characters and the world Nick Cutter built. Can’t say anything bad about the language either. I read the first 2/3 of the book in two days. It took me a whole week to finally bring myself to finish it. But I need to mention that I don’t think it’s because the last third of the book is bad. I think it’s just that I really didn’t agree with the choices the author made and what he made his characters do.

Without going into details, because that would be a huge spoiler, but I don’t think anyone would make the choice the protagonist makes in the end, no matter how crazy they become. There is no mistaking that evil thing for his son. Sorry that’s just not plausible.

I have two other gripes with this book.

The first one is also deeply personal and might not put off other readers. But for me, there were way too many flashbacks in this book. I understand that they are necessary and an important part of the story, and that the reader wouldn’t understand what’s going on without at least some of them. But they are just too long! And they break the narrative, killing the suspense. I mean one chapter we are on board of the positively creepy Trieste and the tension can be cut with a knife… and then we have a whole chapter about the day the protagonist’s son disappeared. Once we come back to the Trieste, the tension is gone, flushed down the drain.

My second gripe is how the characters behave. I mean they are both smart people, they both come to the realization that weird s%&t is happening on board of that station, and that they are more susceptible to it when they are alone. So why oh why do they think that separating and wandering off on their own is a good idea? And why did the author use that tired old trope from every bad slasher / horror movie ever? Especially if bad stuff repeatedly happens when they do it, surely after the third time they would have worked out that staying together might be wiser?

So to summarize, it’s a well-written book with an interesting story. Some of the things in it didn’t work for me, but that doesn’t mean they wouldn’t work for other readers. So I would say, if you like horror, you should give The Deep a try.

PS. This review is for an advanced copy I got from NetGalley. 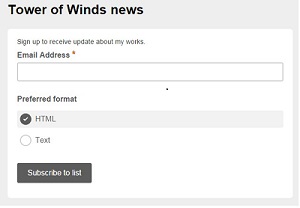 I am a Russian-Swiss-American citizen of the world. I have traveled all over the globe and ended up in Texas, USA, where I live with my husband and two cats who believe they are the rulers of this house and the humans that live in it. I have an 8 to 5 job as a training specialist for a financial firm and the rest of the time I write stories “for fun and pleasure,” though most of the time it feels like pulling teeth or bleeding on the page. I have two novels, Of Broken Things and The Choices We Make, which are both in the fully finished first draft stage. I’m currently editing Of Broken Things and letting Choices sit in a desk drawer for a few months. I’m also editing my novella Mists of the Crosswords which is almost ready for beta readers. Looking for a few betas btw who are not afraid to give honest feedback. I have an idea for a serial of short stories called the Eye of the Norns Cicle. The first short story had been published in an anthology, the second story is written down but needs editing, and I’m outlining the next three stories. I think I have enough ideas for 2 seasons of 6 stories each. I also love reading sci-fi, fantasy, dystopia, urban fantasy and post -apocalyptic books. I have been known to pick up a romance or two from time to time, but NEVER in the contemporary or historical genres. I don’t read YA, children books or nonfiction.

My dreams and stories. The life of a writer.